In Musical Resilience, Shalini Ayyagari shows how professional low-caste musicians from the Thar Desert borderland of Rajasthan, India have skillfully reinvented their cultural and economic value in postcolonial India. Before India's independence in 1947, the Manganiyar community of hereditary musicians were tied to traditional patrons over centuries and through hereditary ties. In postcolonial India, traditional patronage relations faded due to new political conditions, technological shifts, and cultural change. Ayyagari uses resilience, one of the most poignant keywords of our times, to understand how Manganiyar musicians sustain and enliven their cultural significance after the fading of traditional patronage.

SHALINI AYYAGARI (Pittsburgh, PA) is an ethnomusicologist who works across the fields of musical culture, South Asian studies, critical ethnography, and development studies. She is an Assistant Professor of Music (Ethnomusicology) at the University of Pittsburgh.

"Ayyagari presents much-needed work in the realm of social and cultural history and anthropology of the Thar region. This book is a very important contribution in the study of influence of patronage on performative traditions and the locations of performative communities."

~Tanuja Kothiyal, author of Nomadic Narratives: A History of Mobility and Identity in the Great Indian Desert

"Musical Resilience is a compelling account of the strategies Manganiyar musicians use to (re)frame the significance of their musical heritage, adapt to the needs of their audiences, and accommodate changing social, political, and technological landscapes." 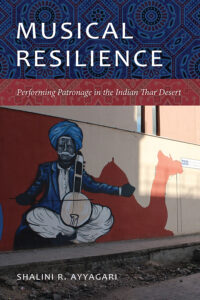 Read an excerpt of the book here.