A Spicing of Birds

A Spicing of Birds is a unique and beautifully illustrated anthology, pairing poems from one of America's most revered poets with evocative classic ornithological art. Emily Dickinson had a great love of birds—in her collected poems, birds are mentioned 222 times, sometimes as the core inspiration of the poem. However, in existing anthologies of Dickinson's work, little acknowledgment is made of her close connection to birds. This book contains thirty-seven of Dickinson's poems featuring birds common to New England. Many lesser-known poems are brought to light, renewing our appreciation for Dickinson's work.

The editors' introduction draws extensively from Dickinson's letters, providing fascinating insights into her relationship with birds. The illustrations, by late 18th century to early 20th century artists/ornithologists, are often so apt as to seem to have been created with the poems in mind. Included are beautiful watercolors by Mark Catesby, engravings of John James Audubon's paintings, illustrations by Alexander Wilson, chromo-lithographs by Robert Ridgway (curator of birds at the National Museum for some fifty years), paintings by Louis Agassiz Fuertes, and some of the earliest bird photographs by Cordelia Stanwood. The editors also discuss the development and growth of birding in the nineteenth century as well as the evolution of field guides and early conservation efforts. Brief biographies of the artists are included in an appendix. This book is an eloquent tribute to the special place held by birds in our lives and imaginations, and will make an ideal gift for both birders and poetry readers.

EMILY DICKINSON (1830–1886) was a major American poet who lived in Amherst, Massachusetts. JO MILES SCHUMAN is an avid birder and the author of Art from Many Hands, Multicultural Art Projects (1981, 2002) and lives in Phippsburg, Maine. JOANNA BAILEY HODGMAN has enjoyed a lifelong interest in reading and writing poetry. A retired English teacher, she lives in Rochester, New York.

"The poems, selected by Jo Miles Schuman and Joanna Bailey Hodgman, offer a sense of the poet's close connection to her avian friends. The satiny pages are a fine complement to the beauty of Dickinson's imagery and the precise renderings of the artists."

""A Spicing of Birds is a beautifully and sensitively done volume, that offers us a living, breathing slice of the author, and a good start to a reading of the birds in Dickinson's words.""

""The poems, selected by Jo Miles Schuman and Joanna Bailey Hodgman, offer a sense of the poet's close connection to her avian friends. The satiny pages are a fine complement to the beauty of Dickinson's imagery and the precise renderings of the artists.""

""Imagine a stormy day and a cozy fire in a country home with time for a cup of tea or coffee and some quiet, thoughtful moments watching the birds at your feeder. This book brings that feeling into your hands."" 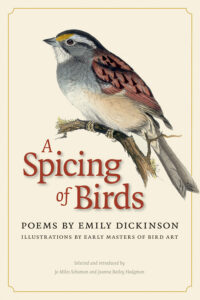