Sound and Sovereignty in Ukraine

Musical representations of wildness in an era of revolution

What are the uses of musical exoticism? In Wild Music, Maria Sonevytsky tracks vernacular Ukrainian discourses of "wildness" as they manifested in popular music during a volatile decade of Ukrainian political history bracketed by two revolutions. From the Eurovision Song Contest to reality TV, from Indigenous radio to the revolution stage, Sonevytsky assesses how these practices exhibit and re-imagine Ukrainian tradition and culture. As the rise of global populism forces us to confront the category of state sovereignty anew, Sonevytsky proposes innovative paradigms for thinking through the creative practices that constitute sovereignty, citizenship, and nationalism.

MARIA SONEVYTSKY is an assistant professor of music at the University of California, Berkeley. She has performed widely, with several bands including The Debutante Hour, Anti-Social Music, and Zozulka, and produced an album called "The Chornobyl Songs Project" on Smithsonian Folkways in 2015 with Ensemble Hilka. She has also taught Ukrainian village songs, accordion, and more.

"Sonevytsky's vivid prose brings together rich ethnography with sophisticated analysis. Through her concept of wildness, she shows how performers disrupt binaries of tradition and modernity, of 'Eastern' and 'Western' culture, as they construct their country's sovereignty. A powerful book!"

"Beautifully written, this vital and sensitive ethnography documents the social, affective, and discursive energies that flow within contemporary Ukrainian music. Sonevytsky highlights the possibilities for imaginative agency that 'wild musics' provide, without ignoring the very real constraints that hem in the Ukrainian subjects whose complex personhood is the real focus of this remarkable book."

"Post-Soviet Ukraine emerges in this beautiful and original book as a place of a vibrant musical and sonic culture. Marked by experiment, hybridity, and 'wildness,' this scene not only produces remarkably creative musical projects, but also makes new forms of political sovereignty, citizenship and community imaginable. A great achievement."

~Alexei Yurchak, author of Everything Was Forever, Until It Was No More: The Last Soviet Generation

"Maria Sonevytsky's book Wild Music: Sound and Sovereignty in Ukraine is a distinguished achievement of contemporary ethnomusicological scholarship. It deals ethnographically with various Ukrainian "ethno-music" (etno-muzyka) phenomena that can be considered borderline, not only in their geographic and cultural designation (Hutsul and Crimean Tatar), but also in their conceptual and political characterization." 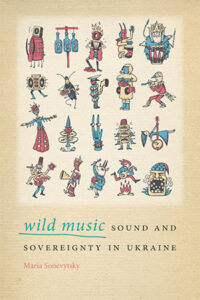 Read an excerpt from Wild Music: Sound and Sovereignty in Ukraine here.