"More About Writing" and Other Essays

Essays and occasional writings from one of literature's iconic voices

Samuel R. Delany is an acclaimed writer of literary theory, queer literature, and fiction. His "prismatic output is among the most significant, immense and innovative in American letters," wrote novelist Jordy Rosenberg in the New York Times in 2019. This anthology of essays, lectures, and interviews addresses topics such as 9/11, race, the garden of Eden, the interplay of life and writing, and notes on other writers such as Theodore Sturgeon, Hart Crane, Ursula K. Le Guin, Hölderlin, and an introduction to—and a conversation with—Octavia E. Butler. The first of two volumes, this book gathers more than 30 pieces on films, poetry, and science fiction. These sharp, focused writings by a bestselling Black and gay author are filled with keen insights and observations on culture, language, and life.

In 2016, Samuel R. Delany was inducted into the New York State Writers Hall of Fame. He is the author of Babel-17, Nova, Dhalgren, Dark Reflections, Atlantis: Three Tales, the Return to Nevèrÿon series, an autobiography, The Motion of Light in Water, and the paired essays Times Square Red / Times Square Blue. Dark Reflections won the Stonewall Book Award for 2008, and in 2015 he won the Nicolas Guillén Award for Philosophical Literature, and in 1997 the Kessler Award for LGBTQ Studies. As well, he has won four Nebula Awards from the Science Fiction Writers of America, and two Hugo Awards from the World Science Fiction Convention. In 2013, he was made a Grand Master of Science Fiction, following in the steps of Asimov, Heinlein, and Le Guin.

"Occasional Views, Volume 1 is an incredibly generous entry point to Samuel R. Delany's pioneering insights about the intersections of genre, race, sexuality, Science Fiction and what it means to live through and amongst those categories. As he states, 'What we need is not so much radical writers as we need radical readers!' This collection helps us satisfy that deeply necessary and timely cultural need."

~Louis Chude-Sokei, author of Floating In A Most Peculiar Way: A Memoir

"Samuel R. Delany has such an intoxicating, prodigious, conversational mind, and More About Writing and Other Essays is a delicious journey into his brilliance. Whether he is unveiling how he navigates the terrain of being a science fiction writer; or introspective reflections on race, class, sexuality; or trusting his listeners as he gives wide ranging, honest answers in his interviews, responding with exacting humor to his critics, remembering Clarion teaching experiences, regretting missed sexual encounters with favorite writers, creating space for the complexity of holding love and questions in the same breath—we see how thoroughly he thinks about everything, and how vibrant and multitudinous the web of connections is in his memory and imagination. Reading Delany will make you a better writer. (I was particularly enthralled to read the dialogue with, and later introduction of, Octavia E. Butler right as she's finishing The Parable of the Talents!)."

"By turns gutsy and erudite, challenging and gracious, Delany's Occasional Views gives illuminating glances of his mind's life journey. How lucky we are to have these proofs of the resonant truths he has discovered along the way!" 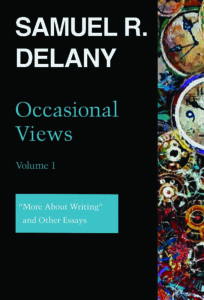