A memoir about disability and siblinghood that is candid and comical

Nothing Special is a disarmingly candid tale of two sisters growing up in the 1970s in rural Connecticut. Older sister Chris, who has Down syndrome, is an extrovert with a knack for getting what she wants, while the author, her younger, typically developing sister shoulders the burdens and grief of her parents, especially their father's alcoholism. In Nothing Special Bilyak details wrestling with their mixed emotions in vignettes that range from heartrending to laugh-out-loud funny, including anecdotes about Chris's habit of faux smoking popsicle sticks or partying through the night with her invisible friends. Poet and disability advocate Dianne Bilyak strikes a rare balance between poignant and hilarious as she paints a compassionate and critical real-world picture of their lives. They struggle, separately and together, with the tension between dependence and independence, the complexities of giving versus receiving, the pressure to live as others expect, and in the end, the wonderful liberation of self-acceptance.

DIANNE BILYAK (Stafford Springs, CT) is a Pushcart-prize nominated writer, graduate of the Yale Divinity School, and Connecticut disability rights advocate. Her book of poems Against the Turning was published by Amherst Writers & Artists Press in 2011, and her poetry has also been featured in Meat for Tea, Freshwater, Drunken Boat, The Massachusetts Review, and The Tampa Review.

"As sister to Chris, a sassy, gender-fluid, rule-bending extrovert with Down syndrome, Dianne Bilyak—a thoughtful, shy, occasional rebel drawn to the page and the stage—spent her life experiencing a vast array of emotions, from loyalty and admiration to feeling lost in the shadows and bereft of identity. In Nothing Special, her highly readable, cliche-free memoir, Dianne shares her fifty-year journey of siblinghood and self-discovery. Rich in character, humor, hard-earned insights, and love, Dianne's story will surprise the uninitiated, be revelatory to parents, and, for those who also walk in her shoes, resemble a friend whose words shine with truth."

~Rachel Simon, author of Riding the Bus with My Sister

"As soon as I finished reading, Nothing Special, I thought: wow, this book is a knockout! I'm grateful to Bilyak for writing it. It is just so moving and thoughtful. What a feat!"

~Li-Young Lee, author of The Wingéd Seed: A Remembrance

"In Nothing Special Dianne Bilyak tells the story of her older sister in a poignant, comic, and sometimes haunting examination of visible and invisible disabilities. Born with Down syndrome Bilyak's sister has her own story to tell. This is a complex, inventive, and indelible memoir about two lives sustained by ardor, curiosity, and imagination."

~Steve Kuusisto, author of Planet of the Blind and Evesdropping

"Nothing Special is a revaluation of cultural perceptions of Down syndrome and a realistic portrayal of gritty humor in the face of adversity. Bilyak's honesty is breathtaking, with anecdotes ranging from poignant to laugh-out-loud funny."

~Richard Blanco, author of How to Love a Country

"Dianne Bilyak's Nothing Special is, despite its witty title, something special. Honest, hilarious, and heartfelt, she takes us on a wild ride with her charismatic sister, the unflappable, self-avowed and completely uncowed Dr. Irma King, who just happens to have Down syndrome."

"With charming specificity and hilarity, Bilyak writes frankly about her own identity, and that of her sister's, comparing her own self-consciousness with her sister's striking lack thereof. Through honest self-reflection and observation, Bilyak hits home something that we so badly need to hear right now: that people with disabilities are not a monolith, and that there is no perfect way to love or be loved by them."

~Bekah Brunstetter, playwright, screenwriter, and writer and producer for NBC's This is Us

"Dianne Bilyak's Nothing Special is wonderfully fulfilling and accessible—you feel like you're reading this incredibly honest diary about the complexities of family that's so relatable, especially as a sibling to someone with unique needs. Bilyak has written a beautiful, and beautifully candid book on the sibling relationship and more!" 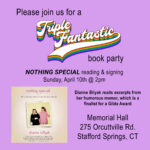