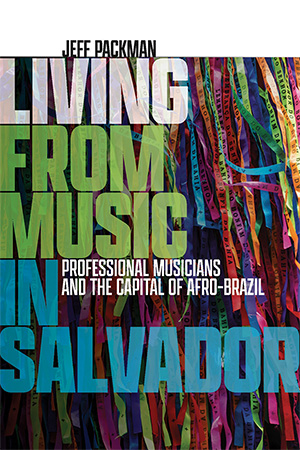 Living from Music in Salvador: Professional Musicians and the Capital of Afro-Brazil is an examination of music as labor, and musicians as laborers in Brazil. Specifically, in Salvador da Bahia, the urban state capital with a population of nearly three million that is widely regarded as Brazil’s most African city. Drawing on fieldwork that spans 16 years, the author explores local musicians’ lives as members of a flexible work force that is culturally rich but economically poor. These working musicians are crucial participants in the economy of Salvador, which relies heavily on the commodification of Afro-diasporic expressive culture. Performing in clubs and restaurants, during Carnaval parades and festival celebrations, and on concert stages and in studios (at times backing marquee artists), they support themselves and their families and also serve as public representatives of Bahian culture. Yet their success is contingent on their ability to navigate complex and contradictory industry and societal conditions that are informed by the entrenched legacies of colonization, the African slave trade, and the plantation system.

JEFF PACKMAN is an associate professor of ethnomusicology at the University of Toronto who specializes in Brazilian music, popular music of the Americas, and cultural theory. His other scholarly interests include music and materials culture, music cultures of Latin America and the Caribbean, and Afrodiasporic performance.

“Between “work” and “play”, from “working to work” to performance: an instigating ethnography of professional musicians in various musical circuits of Salvador, Brazil, well known for its creative industry.”—Professor Martha Tupinambá de Ulhôa. Universidade Federal do Estado do Rio de Janeiro.

“Studies of popular music (or any sort, for that matter) have tended to focus on people who are exceptional, successful. This necessary book reminds us that most musicians are neither, yet they are by far the most common. Living from Music in Salvador helps us reorient our gaze toward workaday musicians not just in Brazil but everywhere. ”—Timothy D. Taylor, author of Music and Capitalism: A History of the Present