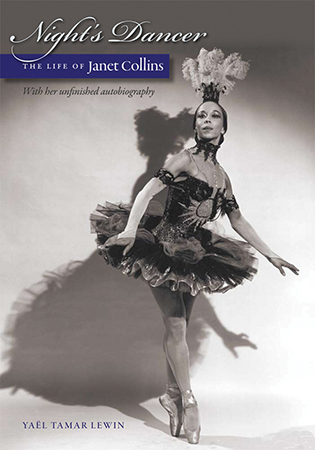 We invite you to post about this important pioneer in African-American dance history, and to “like” and “share” our posts, too! Also, please see below for a current list of participants—you can check out their posts as well.

Collins first appeared at the Met as the leading dancer in a new production of Aïda, which opened the opera company’s 67th season. It brought her international acclaim, both for her dancing and for soaring over the color line as the Met’s first full-time African-American company member—four years ahead of singer Marian Anderson.

Her Met tenure, which lasted through the 1953–54 season, included appearances in Carmen, La Gioconda, and Samson et Dalila. While Collins’s dancing continued to receive wonderful reviews, it was her performances in La Gioconda—in which she portrayed the Queen of the Night in the Dance of the Hours, wearing a ballerina’s traditional tutu and pointe shoes—that established her as a role model for African-American dancers in ballet.

A story told about the Met’s general manager at the time, Rudolf Bing, relates that when the opera company’s board expressed disapproval that he hired an African-American dancer, Bing replied, “Well, I never knew I couldn’t.”

To learn more about Collins’s extraordinary life and career—including her audition for the Ballet Russe de Monte Carlo, which told her that she would have to paint her face white to join the company—please see her authorized biography, Night’s Dancer: The Life of Janet Collins, by Yaël Tamar Lewin, to which Collins contributed her unfinished memoir. This autumn also marks the 10th anniversary of its publication.

Read a recollection of Janet Collins, from Judith Judson, here.

Special thanks to our Friends of Janet Collins Day:

International Association of Blacks in Dance

Individuals who are participating or assisting:

Thank you for celebrating Janet Collins with us!

View a listing of dance books here, including some great gift ideas.
Be sure to use code Q301 at check out to receive a 30% discount.