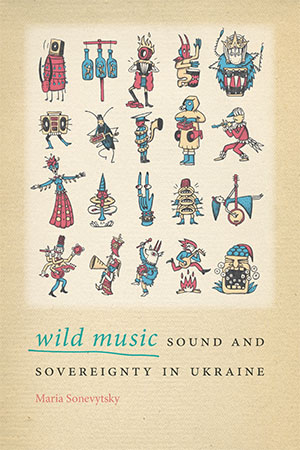 “For years, the Ukrainian band DakhaBrakha has ended its shows chanting, “Stop Putin! No war!” What they had protested has now come to pass.”

“DakhaBrakha often sings about love, heartbreak or the seasons, but as stand-in for bigger things—sometimes political things—and how they do it expands upon Ukrainian traditional music that uses metaphor in this way,” said Maria Sonevytsky, an associate professor of anthropology and music at Bard College and author of Wild Music: Sound and Sovereignty in Ukraine, in an interview with The New York Times. Sonevytsky devotes a chapter of her book to DakhaBrakha, and she recently gave a public lecture, “Understanding the War on Ukraine Through Its Musical Culture,” which you can view here.

Based in Kyiv, DakhaBrakha have been touring the world for a decade. The band was founded in 2004, by three female Ukrainian ethnomusicologists with an interest in their nation’s varied regional styles. Over the years, the band has increased its outward political messaging and activism. Find the full New York Times story and interview with the musicians here.

Read an excerpt from Wild Music: Sound and Sovereignty in the Ukraine here.