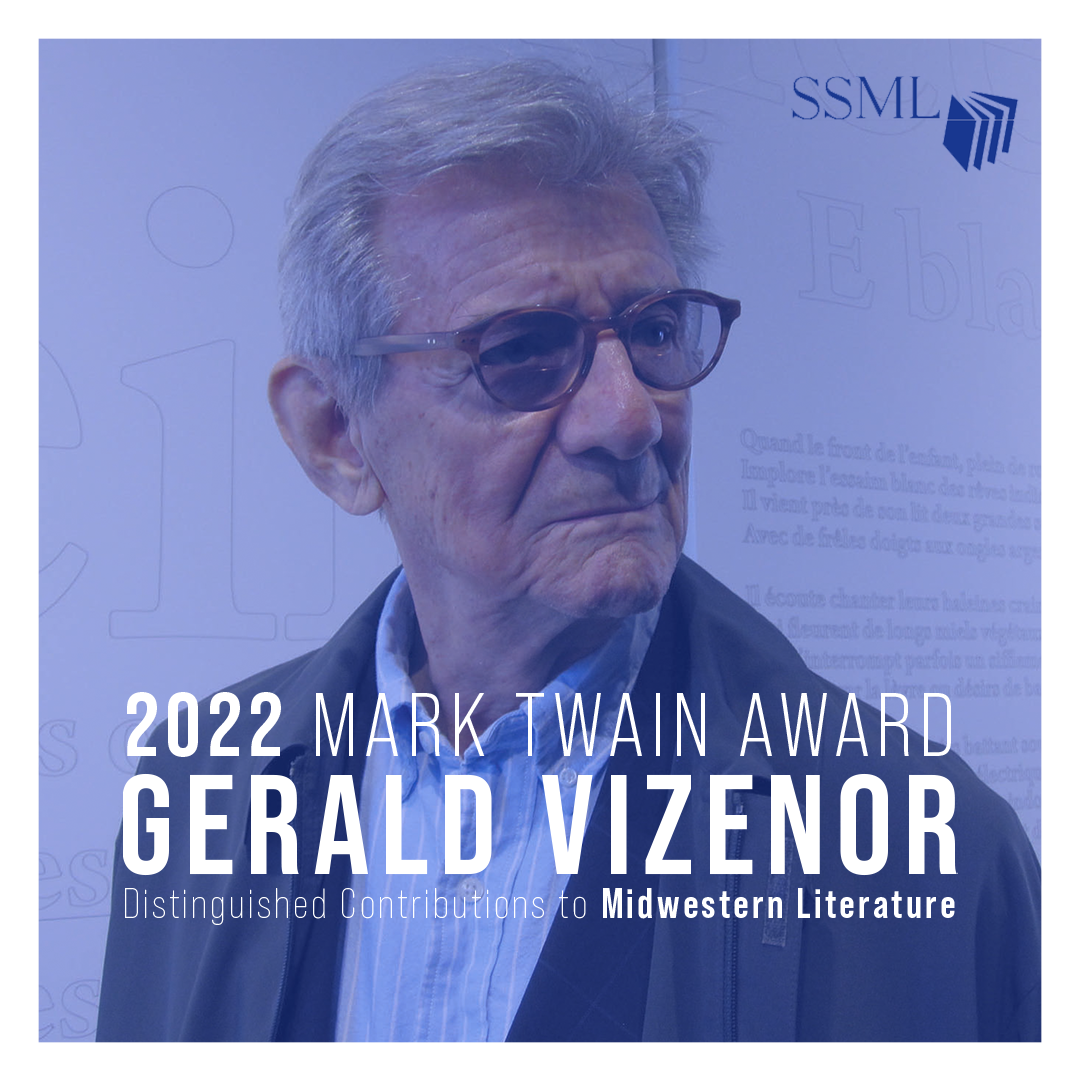 Congratulations Gerald Vizenor! The Society of Midwestern Literature’s Corporate Board has awarded Vizenor with the 2022 Mark Twain Award for Distinguished Contributions to Midwestern Literature. The Society has given this award every year since 1980; past winners include Wright Morris, Gwendolyn Brooks, Jim Harrison, and Ted Kooser. This honor recognizes Vizenor’s profound work in shaping understanding of the Midwest as an incredibly diverse and complex region.

Gerald Vizenor is a prolific novelist, poet, literary critic, and citizen of the White Earth Nation of the Anishinaabeg in Minnesota. In his career, he has written over 40 books in a variety of genres, including 14 novels and innumerable essays. He is professor emeritus of American Studies at the University of California, Berkeley, and a professor of American studies at the University of New Mexico. Among his countless honors, Vizenor is the recipient of a Lifetime Achievement award from the Native Writer’s Circle of the Americas and a Distinguished Achievement award from the Western Literature Association.

As one of the most important native scholars of our time, Vizenor’s creativity knows no bounds as he is willing to defy conventional narrative structures, often using traditional Native storytelling techniques that draw from oral tradition and myth and interweaving history, cultural stories, and irony.

In Blue Ravens: Historical Novel (Wesleyan University Press, 2016) Vizenor weaves an engrossing historical portrayal of Native American soldiers in World War I. Blue Ravens is set at the start of the twentieth century in the days leading up to the Great War in France, and continues in combat scenes at Château-Thierry, Montbréhain, and Bois de Fays. The novel contains many of his recurrent cultural themes—the power and irony of trickster stories, the privilege of survivance over victimry, natural reason, and resistance.

Furthermore, Vizenor’s ability to recontextualize the Native American experience transcends form as he has shown masterful control that spans multiple forms, such as haiku, short stories, and screenplays.

In his most recent poetry publication, Favor of Crows: New and Collected Haiku (Wesleyan University Press, 2014), Vizenor blends Japanese verse form with Anishinaabe dream songs. In the introduction to the book, he writes about the Anishinaabe tradition of “dream songs.” In his ethnography Chippewa Customs, anthropologist Francis Densomore wrote that the “ability to dream was cultivated from earliest childhood…thus the imagination was stimulated, and there arose a keen desire to see something extraordinary in sleep.” The Anishinaabe believe that their dreams offer visions of previous existences, and they wrote dream songs to honor their dreams. It is a form that Vizenor says resembles the haiku as both haiku and Anishinaabe dream songs capture moments of creation.

Vizenor is a unique voice of Native American presence in the world of modern literature, and in his inimitable creative style he is able to reframe common, one-dimensional notion of Indianess. In a 1995 interview, he told Utne Reader that Indians are usually “limited to one environment, with the illusion of stability in that environment. But Indians have been engaged all over the world for centuries, in Europe, even in Asia. The first western teacher of English in Japan was a Native American.”

We encourage you to stay tuned as Gerald Vizenor’s next novel, Waiting for Wovoka: Envoys of Good Cheer and Liberty, is scheduled to release during the spring of 2023. In the meantime, if you haven’t already, we suggest his most recent novels: Native Tributes (Wesleyan University Press, 2018) and Satie on the Seine: Letters to the Heirs of the Fur Trade (Wesleyan University Press, 2020).