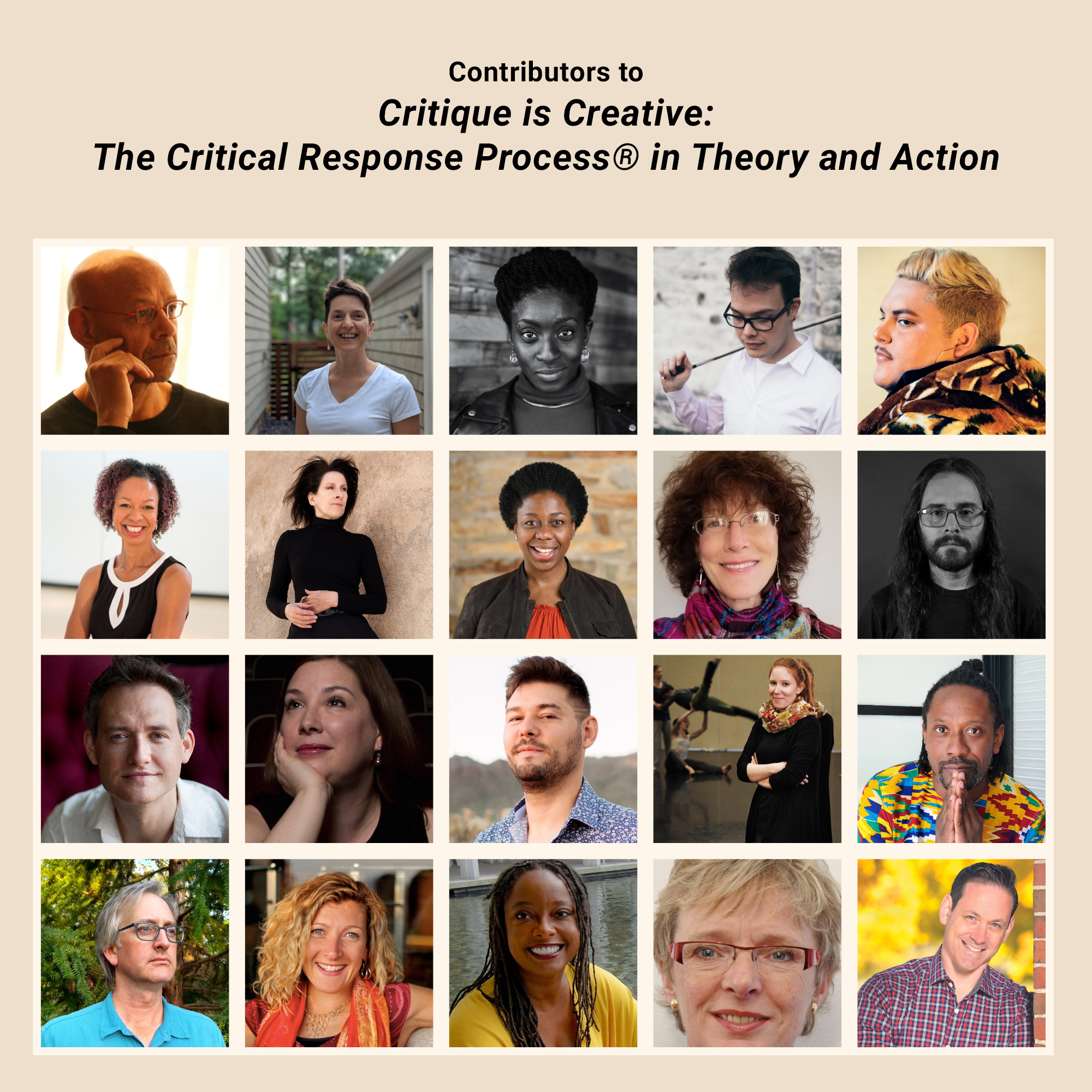 A guest post by John Borstel, co-author and editor of Critique Is Creative: The Critical Response Process® in Theory and Action.

After several years in the incubator, Critique Is Creative has hatched. This new book about Liz Lerman’s Critical Response Process® (CRP) is now available. CRP is a facilitated four-step process for giving and getting feedback on creative works in progress and a flexible toolkit of principles that can enhance all kinds of human communication. As co-authors, Liz and I are excited to be responding to the demand for a book that augments our existing short primer with an in-depth study covering the origins, impetus, theory, applications, and occasional problematics of CRP.

Liz and I couldn’t have done it alone. And we didn’t! In addition to the stalwart support provided by Team Liz, we enlisted 21 contributing writers to provide a wide-ranging clutch of essays that make up the second half of the book. All are hands-on users of CRP, applying its principles in fields ranging from art to education to science to organizational development.

Since its start around 1990, Liz Lerman has shared CRP generously, with constant encouragement for practitioners to experiment and adapt the Process to their own needs and contexts. As a result CRP has been the source of ongoing discovery. As much as Liz is still the source and I’ve done my best to serve as shepherd, the bigger knowledge about this process, its implications and applications, has literally gone global. With intense dialogue within the annual cohorts of our CRP Certification Program, frequent exchange of ideas among an international network of users, and now the myriad voices collected in Critique Is Creative, we’ve reached a new understanding: The deeper, broader knowledge of CRP is now held by a collective intelligence, its integrity upheld by a true community of practice.

It is wondrous to have this community of practice enlivening the pages of Critique Is Creative, and as editor of the book it was a delight and revelation to be buzzing with this transdisciplinary hive mind.

Primarily organized into three chapters, “Learning and Teaching,” “Artistry and Institutions,” and “Communities and Change,” the contributions to Critique Is Creative reflect the many paths by which CRP makes its way in the world. Some guest authors are “old guard” practitioners with long standing connections to Dance Exchange, the home institution for CRP directed by Liz Lerman from 1976 to 2011: DX-affiliated artists Elizabeth Johnson Levine and Gesel Mason each offers an essay describing CRP’s use in learning contexts. Current DX Artistic and Executive Director Cassie Meador collaborates with humanities scholar Bimbola Akinbola on a report detailing the application of CRP principles in a dance project engaging Dallas community members, while the late Shula Strassfeld is joined by Kevin A. Ormsby and Charles C. Smith to tell the story of CRP application within the institutional change work of Cultural Pluralism in the Arts Movement Ontario (CPAMO).

Other contributors emerge from the CRP-based residency work that Liz and I have done over the years: Mark Callahan, who sets the frame for the book’s examination of feedback, and Rebekah West, writing about the Process in interdisciplinary collaboration, both hosted University-based CRP training residencies. Carlos Lopez-Real and Gerda Van Zelm, reflecting on CRP in jazz and vocal pedagogy respectively, arrived in the book through Liz’s extended work with ICON, the Innovative Conservatoire, through its European-based gatherings.

Some guest authors are people who originally approached us with stories about their innovations with CRP, stories that were too good not to share: Isaac Gómez describes the Civic Dramaturgy variation of CRP that he uses to support antiracist dialogue in post-show feedback sessions. Jill Waterhouse details the Process as a key element in nurturing the work of emerging visual artists. And two educators, Kathryn Prince and Sean Riley, explain how variations of CRP actualize values like autonomy and intrinsic motivation as vital elements in a curriculum. Other contributors came to us when we heard their stories through the grapevine and pursued them, namely Lawrence Edelson on the uses of CRP in cultivating new opera and Rachel Miller Jacobs on its value in congregational worship.

Finally there’s a group we might describe as the “new guard,” people who’ve entered the inner circle of CRP dialogue since Liz left Dance Exchange to forge new paths, first as an independent artist in Baltimore and now as Institute Professor at Arizona State University. This group includes CJay Philip writing on how the values of CRP inform many levels of the work of her organization Dance & BMore, Lekelia Jenkins offering a variation of CRP for peer review in STEM disciplines, and Phil Stoesz sharing his discoveries on CRP for relationship dialogue and other human interactions. Artist and scholar Cristóbal Martínez provides the final essay in the book with a challenging consideration of CRP’s orientation to time and place as it functions in the present and might manifest in the future.

And the future is where I truly think the collective intelligence of these contributors are pointing the Critical Response Process. Critique Is Creative marks the start of a library of resources by diverse authors on the applications and implications of this game-changing method. It can only grow from here.