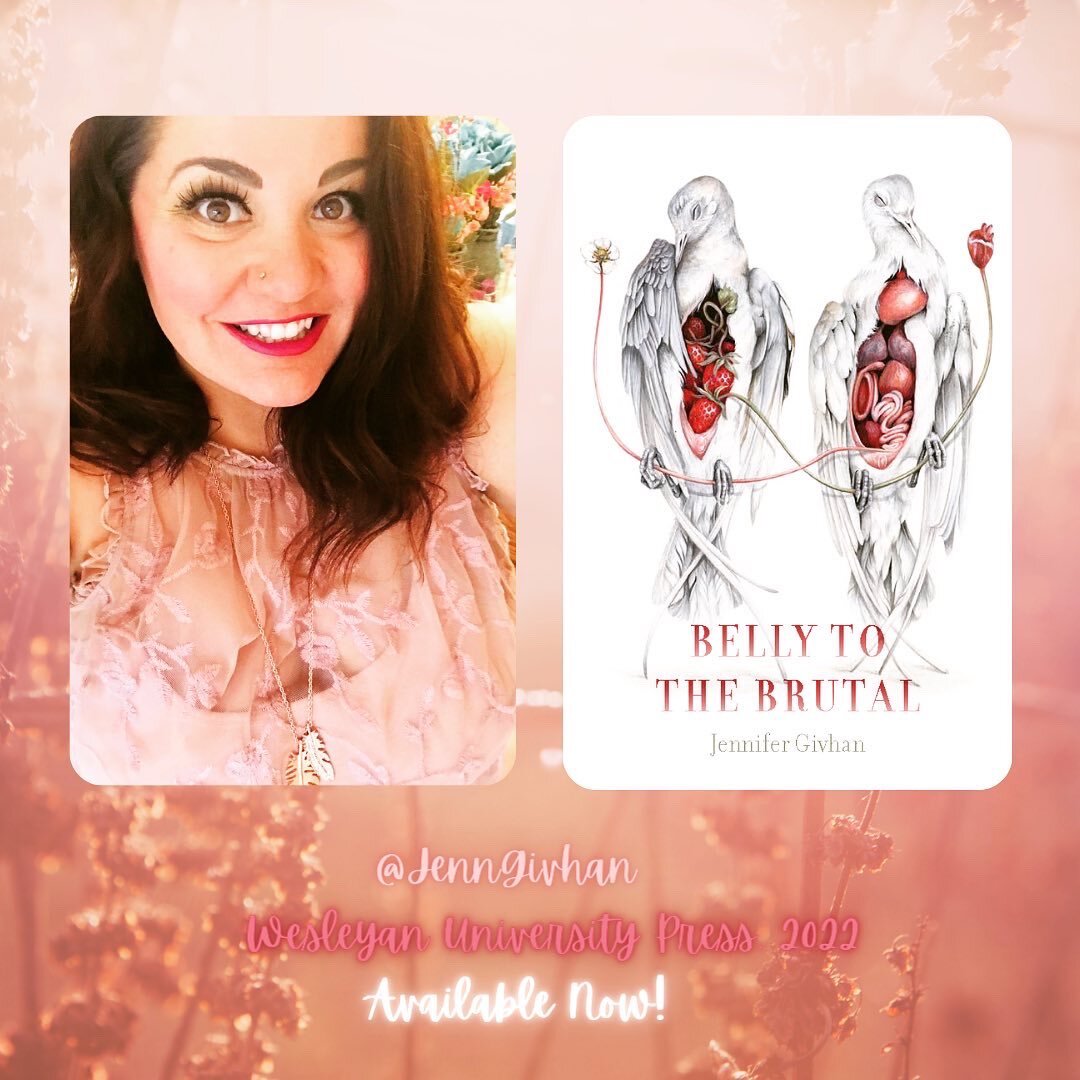 JENNIFER GIVHAN is an award-winning Mexican-American poet and novelist whose family has ancestral ties to the Indigenous peoples of New Mexico and Texas. Her books of poetry include Landscape with Headless Mama (2016, Winner of the Pleiades Press Editors Prize for Poetry), Protection Spell (2017, Finalist, Miller Williams poetry prize), Girl With Death Mask (2018, Winner of the Blue Lights Book Prize), and Rosa’s Einstein (2019, Camino del Sol series).

Her newest book, Belly to the Brutal, sings a corrido of the love between mothers and daughters, confronting the learned complicity with patriarchal violence passed down from generation to generation. This poetry edges into the borderlands, touching the realm of chora—humming, screaming, rhythm—transporting the words outside of patriarchal and racist constructs. Drawing from curanderisma and a revived wave of feminist brujería, Jennifer Givhan creates a healing space for Brown women and mothers. Each poem finds its own form, interweaving beauty and devastation to create a pathway out of the systems that have for too long oppressed women. The poems dwell in the thick language of “motherfear,” “where love grows too / in the shining center of the wound.” This poetry of invocation moves toward a transformation of violence that is ultimately redemptive.

If you enjoy this interview, be sure to check out our podcast series Life Lines: Poets In Conversation, which includes an interview with Jennifer Givhan as well as interviews with Abigail Chabitnoy, Brenda Hillman, Irena Klepfisz, and Kerri Webster.

Wesleyan UP: The book has beautiful cover art, from the painting “My Apology” by Christina Mrozik. Could you tell me a little more about the art and the artist? Why you chose it?

Jennifer Givhan: Cristina Mrozik’s surreal animalia and blending of anatomy with flora and fauna spoke to me on a visceral level as I searched for cover art for Belly to the Brutal, in which I delve into the
underbelly, into the dark, damp seedbeds and soil of girl-woman-mother/hood and seek
connection between past, present, and future to grow out of the viscera something beautiful.
“My Apology” does this powerfully as artwork and reminded me of Frida Kahlo’s “The Two
Fridas,” in which one Frida carries the other Frida’s heart in her own chest, as they hold hands,
and one Frida holds the clamping vein. In Mrozik’s cover art, each paloma/dove is slit open at
the belly, revealing the innards—one bird with fruit and the other with organs—and one holds
a strawberry, the other a heart. Mrozik asks us to notice the deeper resonances here of
tenderness, betrayal, and forgiveness. The poetry of Belly to the Brutal evokes all of these
images and themes in its pages, so when I stumbled across this beautiful artwork, I knew it was
the cover.

Wesleyan UP: In Belly to the Brutal, the concept of the feminist brujería comes up. Could you tell us a
little more about that?

Jennifer Givhan: I’m asked this question often, since for some Latinx folks calling myself a bruja and invoking brujería in my writing carries a negative connotation that likely stems from the Spanish colonizers’ interpretation of ancient spiritual practices and the practitioners as the Western conception of sorcerers with malevolent intent; when Catholicism gained its foothold, those who practiced what we might call folk magic were considered witches (and in Spanish, brujas) and feared as such. In Latin American culture, there’s been a tacit divide between curanderas (healers) and brujas (witches) although much crossover in their practices may exist, much in the same way Latinx patriarchal misogyny perpetuates the mother/whore dichotomy. From all of this context, I reclaim the term bruja and the ritual of writing, the magical possibility I invoke for healing and manifesting and empowering and overcoming in the works I create, as brujería.

Wesleyan UP: You are also a novelist, author of such books as River Woman, River Demon and Trinity
Sight. How does writing poetry and novels differ for you? Do the two forms play off of or
inform each other?

Jennifer Givhan: I’m a poet at heart, and I have often discussed elsewhere how taken I am with Julia Kristeva’s theory of the semiotic, prelinguistic chora space of humming and crying and guttural noises and communicating beyond “meaning making” as a child/mother through the womb or in the
newborn stages—how I tap into this realm in my poetics. The same is true for the process of
creating my poems, and as a woman with chronic illness, I often find myself in a state of
exhaustion and/or brain fog (fibro fog). Perhaps because I’m a poet at heart and partly because I’ve dedicated my life to studying the craft of poetry, creating the poems never feels like
work—but freedom. Release, play, heartwork in its purest form. This is not to suggest I don’t
craft and sculpt and revise a hundred times in a hundred iterations. I do. But it’s the kind of soul
work that revitalizes and strengthens and buoys me so that I can return to the other work—the
novels and the rest of my life. And when I’m not writing poetry, I don’t beat myself up, because
I know that, like any true love, poetry will never leave me nor I it.

The heart of my novels is likewise poetry. The deeper themes and resonances, the humanity
buzzing and humming in the characters and their relationships and desires and fears and
resulting choices for better or worse, the beating heart at the center. But the puzzling it all
together, creating believable dialogue that moves the story forward and keeps the pacing
clipped and the reader turning pages—all of this I’ve had to teach myself again and again
because it does not necessarily come naturally to me, and I’ve found I’ve had to forgive myself
and be patient with myself. An analogy that’s helped me lately is that the writing process can
be akin to a child happily at play building with blocks, stacking one atop the other, contentedly.
One block at a time.

I could go on and on about this topic, but suffice it to say that the work does feed each
other—the skills I learn and intuit and develop as a storyteller translate directly to my lyric play
and fascination with compressed narrative and emotional resonance and the unsayable
expressed on the page, for instance through caesura—that which we must leave out of a story,
necessary omissions, either because we do not or cannot know, or because the story can only
be told as such, in the way of hauntings. This is how Belly to the Brutal came to me, and my
great goal now is to translate this poetics—of the chora, of hauntings, of omission, of
compression, of the beating heart at the center and everything else in service to that—into my
novels. We shall see. I must keep playing, keep writing to find out, as we all writers must! The
writing is wiser than we, perhaps, and if I could write my way completely away from the
pobiz/publishing world’s gatekeepers and boxes and pedagogy and marketing tactics—I sense
the truest version of my poeta/cuentista (poetic storytelling) self resides there, and I suspect
she’s been humming in the chora, waiting for me all along. Frida to Frida. Paloma to paloma.
Beckoning.

Wesleyan UP: You write about the body and corporeality quite a bit. In the Western canon,
descriptions of women’s bodies are usually sexualized, from a male perspective. In your
writing, you celebrate the feminine, female lineages, and the female body. Maybe you
can tell us how your work disturbs or interrupts the traditional Western treatment of
the female body?

Jennifer Givhan: As with my reclamation of the title “bruja” for myself, I sense that my writing life (and thereby myself as a woman transformed by the act of writing) has also been a journeying toward that
ancient wisdom embedded, but buried, within my ancestral and cultural genetics/historia, the
kind of cultural intuition (a la Dolores Delgado Bernal who argues that Chicana scholars bring a
distinctive and valuable knowing to the research process often twisted and misunderstood by
white folks) that over time in my family’s lives and my own became warped and twisted but that at the core still shines, whole and unbreakable. In Belly to the Brutal, I trace the process of
the sexualizing and warping of ideals and definition of self into something ugly, monstrous,
guilt-ridden through the women in my family and myself mothering through mental illness. I do
not shy away from the duende but wrestle with it at length in the dank underbelly, fighting hard
to unclench its sharp fangs and claws from the precious, tender self-belief and empowerment
and wonder and badassery that we are, each of us, at our cores.

These poems are for my daughter, twelve this month, who knows her worth beyond a shadow
of a doubt. And for the girl I was at twelve who’d been diminished and effaced too many times
to count by that age, and my mother before her, and her mother before her, and her mother
before her. But when we heal the present, we heal both the past and the future. And my
daughter’s wisdom and strength and undiminishable, indefatigable chingona fierceness lends
the same to all of us women in my family and every woman who reads the book (or any of my
books). It’s accessible to us all.

This book is the rounded, gorgeous mother creation figure of my ancient ancestors. A lovesong
to overflowing, uncontainable women. Even as it never shies away from the ugliness, the
destruction. How the sickness is uprooted by locating the source of pain, naming it, and pulling
it out by the bulbous neck or teeth or claws—whatever it’s been sinking into the skin and
deeper. And singing where before there was silence or screaming or sobs. Singing praise.

All of this to say, the Western fetishization/violation/sexualization of women’s bodies (and
through colonization of our ancient ancestors as well the Latinx machismo practice of violating
women and girls) sought to silence or diminish my shine—women, our shine. And these poems
sing, Hell no.