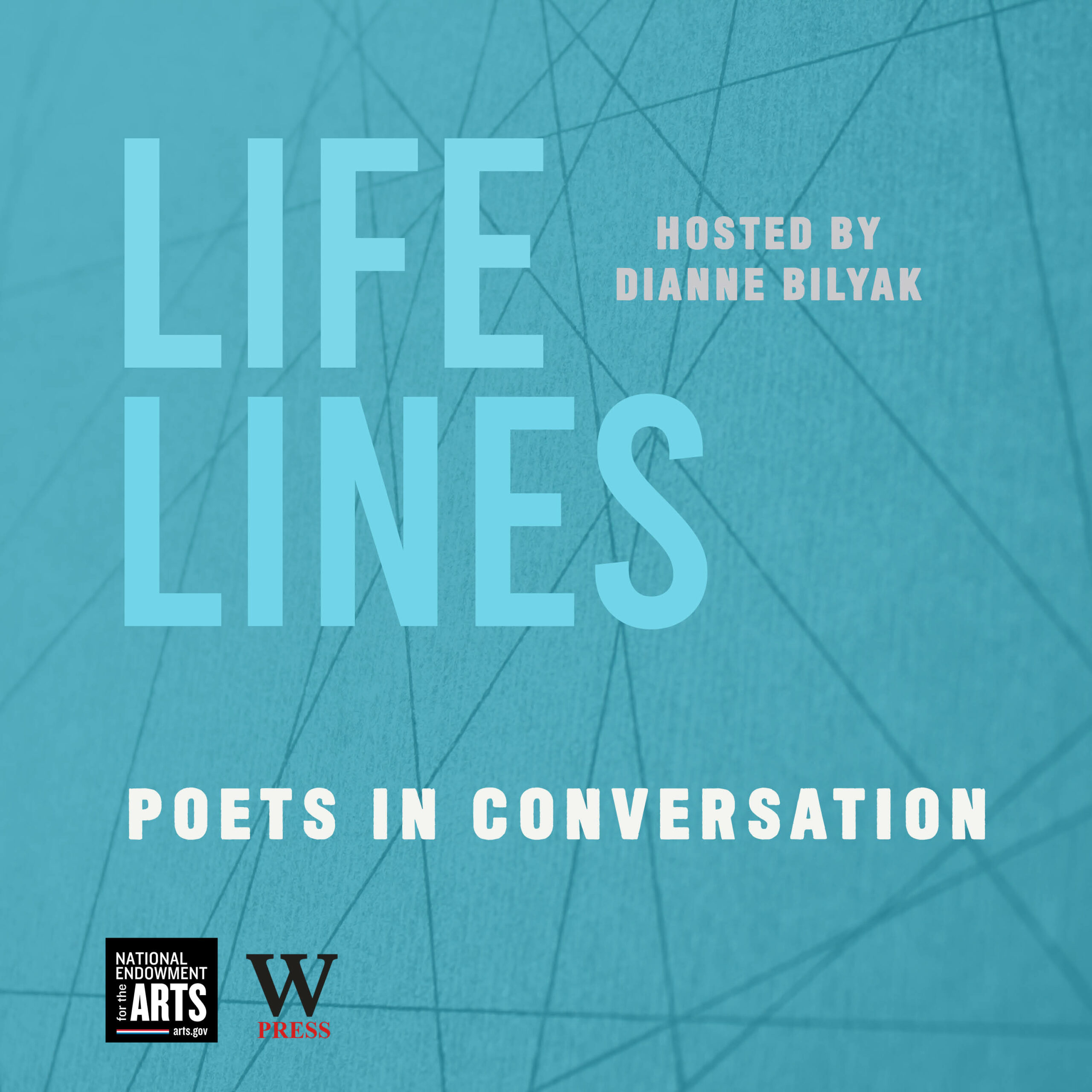 A podcast produced by Wesleyan University Press with a grant from the NEA. Dropping on September 20th.

In the first season of Life Lines: Poets in Conversation, hosted by Pushcart-prize nominated writer Dianne Bilyak, award-winning poets explore how poetry informs critical cultural discussions around grief, identity, womanhood, citizenship, environment, heritage, violence toward women, mother and daughter bonds, and generational trauma. Each guest poet introduces their new book to the audience, providing in-depth insights into their motivations behind the creation of poetry, how the cover art connects to the work, and the themes explored in each book. Guest poets include Jennifer Givhan (Belly to the Brutal), Kerri Webster (Lapis), Brenda Hillman (In a Few Minutes Before Later), Abigail Chabitnoy (In the Current Where Drowning Is Beautiful), and Irena Klepfisz (Her Birth and Later Years: New and Collected Poems, 1971—2021). Each episode begins with a discussion on the genesis of each new poetry collection, and ends with a reading by the poet from their new book. Additionally, three of the five episodes incorporate bi-lingual readings, including Spanish, Yiddish, and Altuiq (a Native Alaskan language.) Life Lines is brought to you by Wesleyan University Press with funding from the National Endowment for the Arts.

Please listen here, or wherever you listen to podcasts.

DIANNE BILYAK (Stonington, CT) is a Pushcart-prize nominated writer, graduate of the Yale Divinity School, and Connecticut disability rights advocate. Her book of poems Against the Turning was published by Amherst Writers & Artists Press in 2011, and her poetry has also been featured in Meat for Tea, Freshwater, Drunken Boat, The Massachusetts Review, and The Tampa Review. Her latest book is Nothing Special: The Mostly True, Sometimes Funny Tales of Two Sisters.

JENNIFER GIVHAN (San Diego, CA) is an award-winning Mexican-American poet and novelist whose family has ancestral ties to the Indigenous peoples of New Mexico and Texas. Her books of poetry include Landscape with Headless Mama (2016, Winner of the Pleiades Press Editors Prize for Poetry), Protection Spell (2017, Finalist, Miller Williams poetry prize), Girl With Death Mask (2018, Winner of the Blue Lights Book Prize), and Rosa’s Einstein (2019, Camino del Sol series). Her latest book of poetry is Belly to the Brutal.

KERRI WEBSTER (Boise, ID) is the author of the poetry collections The Trailhead, We Do Not Eat Our Hearts Alone, and Grand & Arsenal, the latter of which won the Iowa Poetry Prize. The recipient of awards from the Whiting Foundation and the Poetry Society of America, she was a Visiting Writer-in-Residence at Washington University in St. Louis from 2006­–2010. She currently teaches at Boise State University. Her latest book is Lapis.

BRENDA HILLMAN (Kensington, CA) is an activist, writer, editor, and teacher. She has published ten collections of poetry, all from Wesleyan University Press, including Practical Water, for which she won the Los Angeles Times Book Award for Poetry. Her work has been translated into more than a dozen languages. A Chancellor Emerita of the Academy of American Poets, Hillman serves on the faculty of Saint Mary’s College in Moraga, California, and as a staff poet at Community of Writers. Her latest book is In a Few Minutes Before Later, due out in October 2022.

ABIGAIL CHABITNOY (Amherst, MA) is a Koniag descendent and a member of the Tangirnaq Native Village in Kodiak, Alaska. Her first book, How to Dress a Fish, won the Colorado Book Award in the Poetry category and was shortlisted for the Griffin International Poetry Prize. She is an assistant professor at UMass Amherst. Her latest book is In the Current Where Drowning Is Beautiful, due out in November 2022.

IRENA KLEPFISZ (Brooklyn, NY) is professor emerita at Barnard College. She is the author of five books of poetry including Periods of Stress, Keeper of Accounts, Different Enclosures, A Few Words in the Mother Tongue, and Dreams of an Insomniac. She is one of the foremost advocates of the Yiddish language and its renaissance in the United States. Her work has appeared in Tablet Magazine, In Geveb, Sinister Wisdom, The Current, and Languages of Modern Jewish Cultures, Brooklyn Rail, and more. Her latest book is Her Birth and Later Years: New and Collected Poems, 1971­–2021, due out in December 2022.