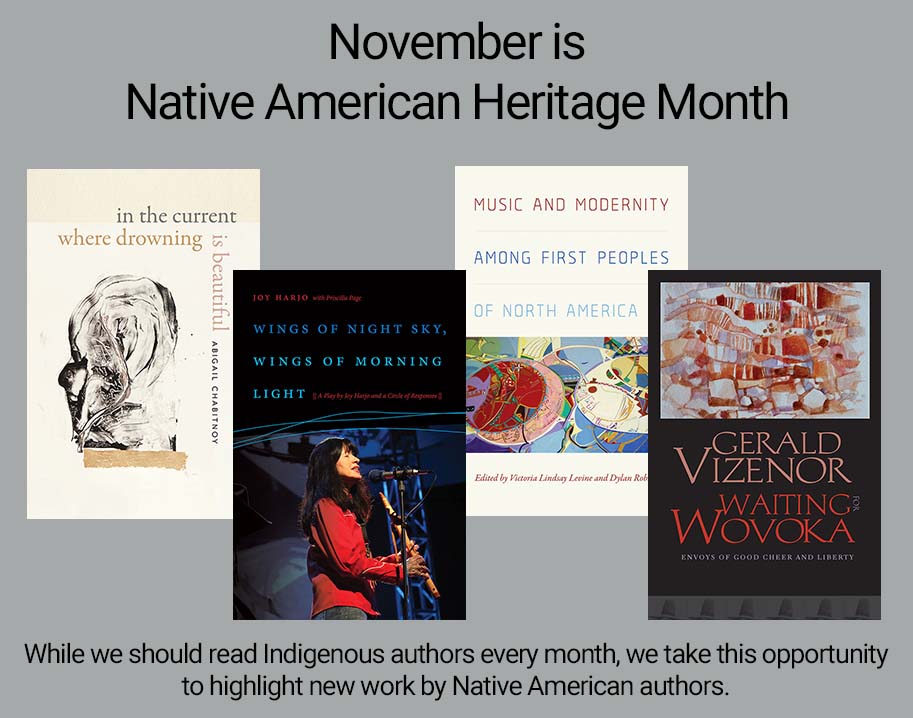 At ‘WesPress’ we are celebrating Native American Heritage Month! Here is a sampling of relevant books about Indigenous people that range from poetry to memoir and highlight North America’s diverse Indigenous communities.

In Mad Love and War

In the Current Where Drowning Is Beautiful

How to Dress a Fish

Satie on the Seine

Music and Modernity among First Peoples of North America

“I first encountered Joy Harjo, member of the Muscogee (Creek) Nation, at the Gathering of Nations powwow in Albuquerque, New Mexico, in the late 1990s. At an offsite event she read some poems, then sang and played her saxophone with her band, Poetic Justice. I was transfixed. I picked up a book of her poetry, “In Mad Love and War” (Wesleyan University Press, 1990), which she signed and inscribed, “For Chris, For Justice, For Love.” I have carried that book with me through every move, every bookshelf culling, every physical and emotional transformation since. At a time when I was just beginning to appreciate poetry, Harjo’s work became a touchstone against which pretty much everything else would be measured. The poetry of other writers has come and gone, but Harjo’s work has remained lodged deep in my heart.”
—Christopher LaTray, The Missoulian

“Harjo’s play follows an ancient path, that of tribal creation, healing pain, loss, love, and ultimately helps us remember we will survive. Wings of Night Sky, Wings of Morning Light: A Play by Joy Harjo and a Circle of Responses is destined to become a classic.”
—LeAnne Howe, Edison Distinguished Professor in American Literature, University of Georgia

“A fascinating, complex portrait of Joy Harjo, the poet musician, emerges from these conversations. Soul Talk, Song Language focuses on her process of making an organic fusion of the musicality of words with the language of the saxophone. Everyone who loves her performances and her writing will want to read this book, which includes Joy’s monthly columns for the Muscogee Nation News.”
—Leslie Marmon Silko, author of The Turquoise Ledge

In the Current Where Drowning Is Beautiful / Abigail Chabitnoy

“This remarkable book undertakes a kind of geological exploration of the hidden-in-plain-sight strata making up the world around us and our lives within it: raspberries against graves against glaciers; disappeared women alongside disappearing rivers; mythic transformations next to anonymous martyrdoms. Connecting it all are stories—the questions they ask and answer, what they reveal or obscure—and water—as source of life and death, body of history and place where history’s bodies are buried, manifestation of the cross-currents that swirl through and around us, bellwether of what’s to come. Chabitnoy invites us into a dazzling, urgent mode of inquiry in which poems—keen and liminal, epic and intimate, fierce and tender—are the conscious element depositing us wide-awake on the shore of the precarious present we inherit and inhabit where, increasingly, ‘the high ground isn’t.'”
—Lisa Olstein, author of Late Empire

How to Dress a Fish / Abigail Chabitnoy

“Never before have readers been of a mind to apprehend such prodigious poems. Determined by the wealth and control of their poet’s language and the most profound respect for the powers of history, this work insists upon the necessity of poetry. Poems like these change the world, connecting us to each other and all else that sustains life. Herein, the lyric bones are barbed and all the crafts: laden. Not in division, but through the responsibility and gifts of this most crucial poet: Abigail Chabitnoy. With her poems, together we may, as real people, spring from and return to the islands, the sea, and the ice with utmost elegance. Traveling together, and most attentive to our context.”
—Joan Kane, 2018 Guggenheim Fellow in Poetry

“Historical novels about Native Americans in World War I are few and far between. This is one such rare book. It speaks to the importance of traditions and the trickster archetype without romanticizing these oft-appropriated symbols. Refusing to give in to a mentality of victimization, Blue Ravens tells an intriguing story while keeping hold of the realities of love, war, traditional culture, and life.”
—Nota Benes, World Literature Today

“Native Tributes will encourage you to revisit the aftermath of World War I – from a Native American perspective.”
—Kristina Baudemann, American Studies Journal

Satie on the Seine: Letters to the Heirs of the Fur Trade / Gerald Vizenor

“As a volume of nature poems, Favor of Crows: New and Collected Haiku is a joyous, flamboyant, and radiant collection that sharpens our ability to perceive and appreciate discrete manifestations of the natural world. Through the vehicle of these wondrous and succinct poems, Vizenor reinforces the reality of our human dependency upon the natural world as the source that sustains us within the cycle of life. He reminds us that we are born to perceive the beauty of our surroundings and, by doing so, celebrate life in all its majesty.”
—Sonja James, The Journal

“Vizenor is unquestionably one of the most radical American literary voices on the subject of racial identity and an ironist extraordinaire as a witness to the aftermath of Manifest Destiny.”
—Voice Literary Supplement

“This stunning book explodes every iteration of the indigenous-modern dialectic. Its essays range across borders, generations, technologies, genres, politics, and identities to produce brilliant and coherent arguments that define the leading edge of indigenous sound studies.”
—Philip J. Deloria, author of Indians in Unexpected Places