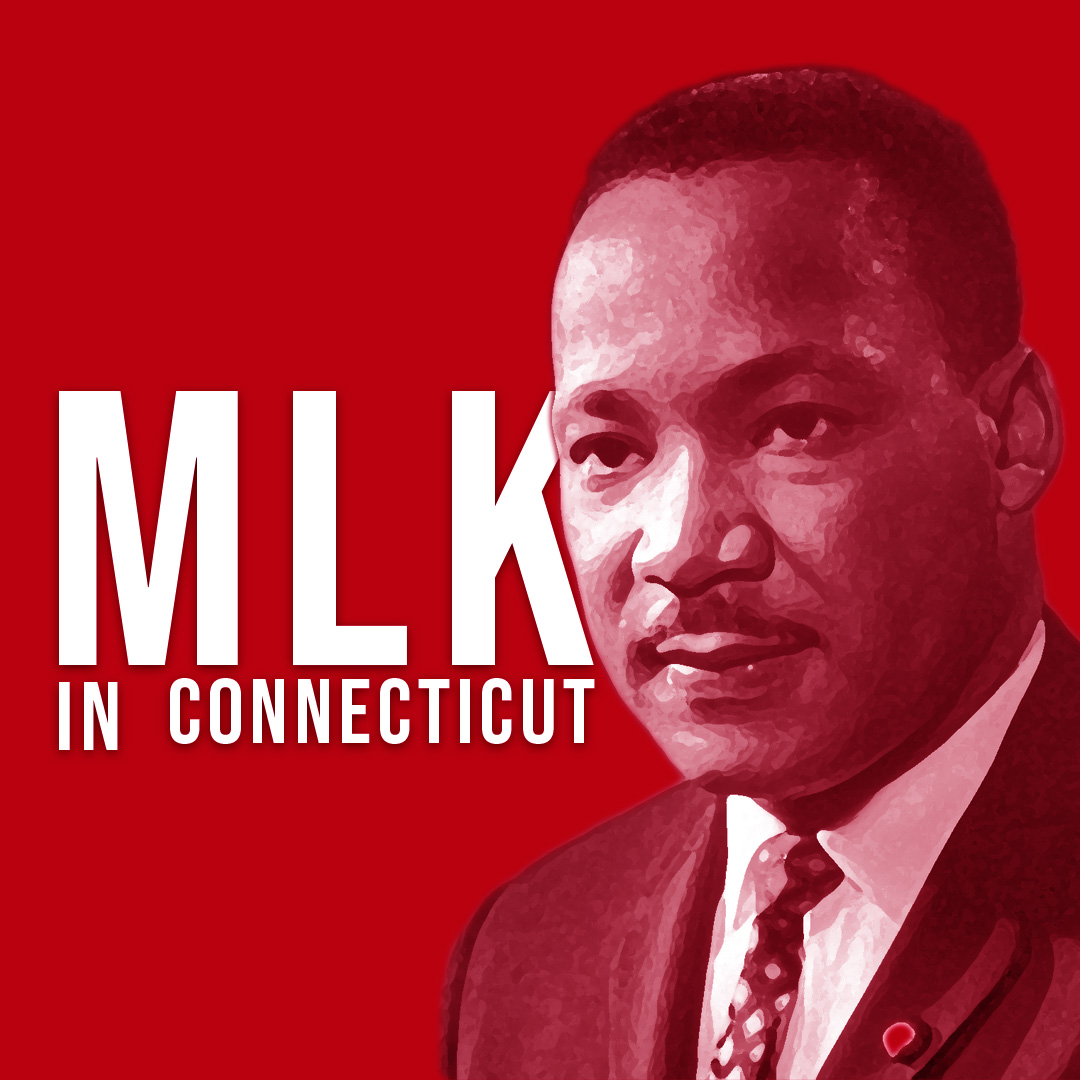 January 16th marks the annual celebration of the life and work of Dr. Martin Luther King, Jr. Connecticut residents might be interested in learning that Dr. King spent some time in our state, both as an unknown student and as a national leader.

As a teenager in 1944 Martin Luther King, Jr. became part of a long tradition of southern students venturing to Connecticut to spend the summer working in the state’s tobacco fields. The teenager joined a group of students from Atlanta, Georgia’s Morehouse College at work on a Simsbury, Connecticut, farm. In My Life with Martin Luther King, Jr., Coretta Scott King recalled that her eventual husband experienced an incredible sense of “freedom” while in Connecticut. Unlike in the South, King and other southern youth ate in restaurants and visited local theaters without having to deal with the horror of legalized segregation. Coretta Scott King argued that the opportunity to lead devotional services with other students that summer started Martin on the road to becoming a minister. This visit to Connecticut had a major impact on the teenage King, but his relationship with Connecticut did not stop there. Later efforts by Connecticans would make important contributions to the non-violent civil rights movement he led in the South. People from Connecticut would frequently travel south to bolster the civil rights movement, and Dr. King’s visits to Connecticut would helped to support and transform African American communities in urban areas here.

In addition to Close’s essay, and other essays dealing with Civil Rights era Connecticut, we find historian Cynthia Reik’s moving essay, “What Would Dr. King Want You to Do?” Her essay deals with King’s tragic assassination and the reaction of school children in Hartford.

On Thursday evening, April 4, 1968, Dr. Martin Luther King, Jr. was assassinated at the Lorraine Motel in Memphis, Tennessee. In response, riots erupted in Hartford’s North End. People were angry about the lack of progress on King’s dream: integrated education, housing, a fair judicial system, and jobs. Republican Mayor Ann Uccello, the first woman elected mayor of a Connecticut municipality and the first woman in the U.S. elected mayor of a capital city, went into the rioting area in a police cruiser on Thursday evening against the advice of most of her administration, carrying but not wearing a riot helmet. The Hartford Times reported that she toured the public housing complexes, “mingling with the people, trying to let them know the city cared.”

The police cordoned off the North End and used massive doses of tear gas to quiet the rioters. Residents in the city’s West End reported that the tear gas was so heavy that it drifted to Elizabeth Park. Showing the extent to which the city was divided, one Fox Scholar graduate of Hartford Public High School, Tom Smith, then attending college nearby, drove to join his family in the North End to share their sorrow but was turned away by police.

Friday morning, after extensive rioting, when Hartford Public High School (where I was a teacher) opened at 7:30 a.m., John Gale (Hartford Public High School class of 1969) recalled that many students remained outdoors, uncertain as to whether it was appropriate to enter the school. The student body was then about 50 percent African American, 15 percent Latino, and the rest white. The principal of Hartford Public High, Dr. Duncan Yetman, came outside to address the reluctant students, asking the question, “What would Dr. King want you to do?” Most students came inside and went to their homerooms for attendance. Over the P.A. system, Dr. Yetman gave students the option of remaining for a regular day or coming down to the office to phone home for parental permission to leave school. For two hours students tied up the office phones, making arrangements to leave.

Instead of going directly home, however, four hundred or more students walked down Farmington Avenue to St. Joseph Cathedral and asked the rector, Monsignor Father John S. Kennedy, to hold a memorial service for Dr. King. Msgr. Kennedy agreed. During this impromptu service, The Hartford Courant’s David Rhinelander reported, Kennedy said, “the Rev. Dr. King was a great black man. He was ‘perhaps the greatest man of his generation.’”