We tend to value choreography over improvisation, and the individual artist over a collective. But for six years in the 1970s, the Grand Union thrived as a democratic, leaderless, quasi-anarchistic band of vivid dance individuals. This was definitely during the “process-over-product” years, and related to that, Baba Ram Dass’s edict to “Be Here Now.” Most of this small group went on the become leaders in postmodern dance, including Yvonne Rainer, Trisha Brown, David Gordon, Steve Paxton, Barbara Dilley, and Douglas Dunn. A sort of Zen-like de-focusing allowed things to sprout up from the unconscious — or from sheer body readiness — that no one could predict. I will show rare videos of the uncanny and unsmooth synergy that kept this group together but also pulled it apart. You will see seeds of the freedom they nurtured and the artists they became.

Get your tickets here. 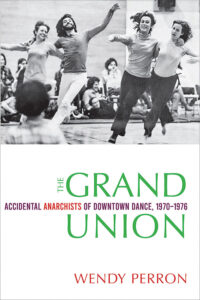