"The Gamble" and Other Essays

More essays and interviews from one of literature's iconic voices

Samuel R. Delany is an acclaimed writer of literary theory, queer literature, and fiction. His works have fundamentally altered the terrain of science fiction (SF) through their formally consummate and materially grounded explorations of difference. This anthology of essays, talks, and interviews addresses topics such as sex and sexuality, race, power, literature and genre, as well as Herman Melville, John Ashbery, Willa Cather, Junot Diaz, and others. The second of two volumes, this book gathers more than twenty-five pieces on films, poetry, and science fiction. This diverse collection displays the power of a towering literary intelligence. It is a rich trove of essays, as well as a map to the mind of one of the great writers of our time.

The Gamble • A Note on John Ashbery • Samuel R. Delany, by K. Leslie Steiner • More and Less • Acceptance Speech for Temple University • Fiction's Present • Two Introductions for Junot Diaz • A Lost Lady and Modernism: Willa Cather • An Interview with Matthew Chaney • Three Novels • Fiction's Present • The Mirror and the Maze, I • Brudner Prize Lecture I • Brudner Prize Lecture II • A Note on William Gaddis • An Interview with Reed Cooley • A Note on The Heart of Darkness • Remembering Pete Seeger • A,B,C: A Preface and an Afterword • A Note on Melville • Absence and Fiction • The Mirror and the Maze II • Ikky, Kong, Frederic, Kurtz • Notes on The City of Green Fire • Sympathy and Power • Ash Wednesday 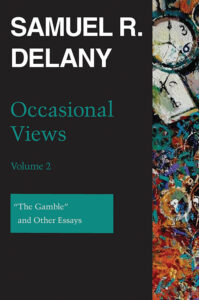