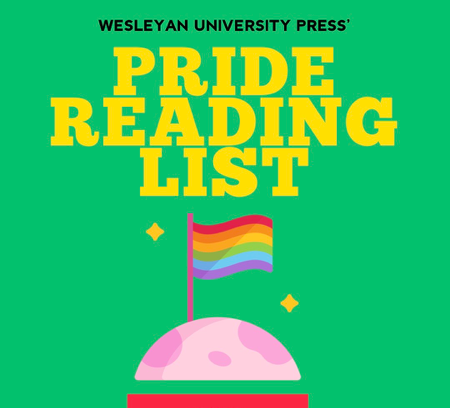 To celebrate, we share with you a Wesleyan University Press Pride Reading List. These titles are by LGBTQ+ authors or detail an important aspect of LGBTQ+ history and culture. The LGBTQ+ community has made immense contributions and these texts are just one way in which we can see that influence. We are proud to support LGBTQ+ authors, readers, and stories—during June and always.

Once in a blue moon, a love like this comes along….

“The poems in Magnified model a fearless relation with lost beloveds that is gorgeous, queer and fiercely alive. Minnie Bruce Pratt, who always writes verse with palpating radical breath, here ignites it with a vision for revolutionary afterlife.”
—Rachel Levitsky, author of The Story of My Accident Is Ours

Magnified is a collection of love poems drawing us into the sacred liminal space that surrounds death. With her beloved gravely ill, poet and activist Minnie Bruce Pratt turns to daily walks and writing to find a way to go on in a world where injustice brings so much loss and death. Each poem is a pocket lens “to swivel out and magnify” the beauty in “the little glints, insignificant” that catch her eye.

Essays and occasional writings from one of literature’s iconic voices

“By turns gutsy and erudite, challenging and gracious, Delany’s Occasional Views gives illuminating glances of his mind’s life journey. How lucky we are to have these proofs of the resonant truths he has discovered along the way!”
—Nisi Shawl, author of Everfair

Essays, lectures, and interviews address topics such as 9/11, race, the garden of Eden, the interplay of life and writing, and notes on other writers such as Theodore Sturgeon, Hart Crane, Ursula K. Le Guin, Hölderlin, and an introduction to—and a conversation with—Octavia E. Butler.

Indispensable volume of previously unavailable poetry by an American master

“Have you read a poet and suddenly feel the shoulders you stand on? Jack Spicer does this to many of us, and now there are more poems! Oh, more treasure! Magic is not a metaphor, and ‘Time does not finish a poem.’ Jack says, ‘Like a herd of reindeer / No one knows your heart.”
—CAConrad

Includes major unfinished projects, early and alternate versions of well-known Spicer poems, shimmering stand-alone lyrics, and intricate extended “books” and serial poems. This new cache of Spicer material will be indispensable for any student of 20th century American poetry, proffering a trove of primary material for Spicer’s growing readership to savor and enjoy.

bury it by sam sax

Occasional Views Volume 1: “More About Writing” and Other Essays by Samuel R Delany

My Vocabulary Did This to Me: The Collected Poetry of Jack Spicer

Be Brave to Things: The Uncollected Poetry and Plays of Jack Spicer

How Reading Is Written: A Brief Index to Gertrude Stein by Astrid Lorange