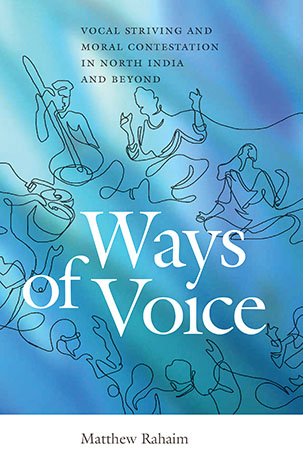 Ways of Voice: Vocal Striving and Moral Contestation in North India and Beyond is the first ethnomusicological monograph to delve deeply into the diverse, variegated techniques of voice production in North India, from Bollywood film singers to modern raga vocality to pop Sulfi songs. It considers the dynamic movement between vocal dispositions—singers who consciously retrain themselves in order to acquire a different voice, focusing on the ways in which singers not only “have” voice, but actively acquire, cultivate and contest particular vocal dispositions. The book deals extensively with the formation and contestation of particular, historically grounded ways of voice, from Bollywood film singers to modern raga vocality to pop Sufi song. Working from dozens of concrete examples, it fills an important gap both in South Asian ethnomusicology and in the emerging field of voice studies. Audio and video examples are provided on the online companion site.

MATTHEW RAHAIM is associate professor of ethnomusicology at the University of Minnesota, author of Musicking Bodies, and a performing Hindustani vocalist in the Gwalior lineage.