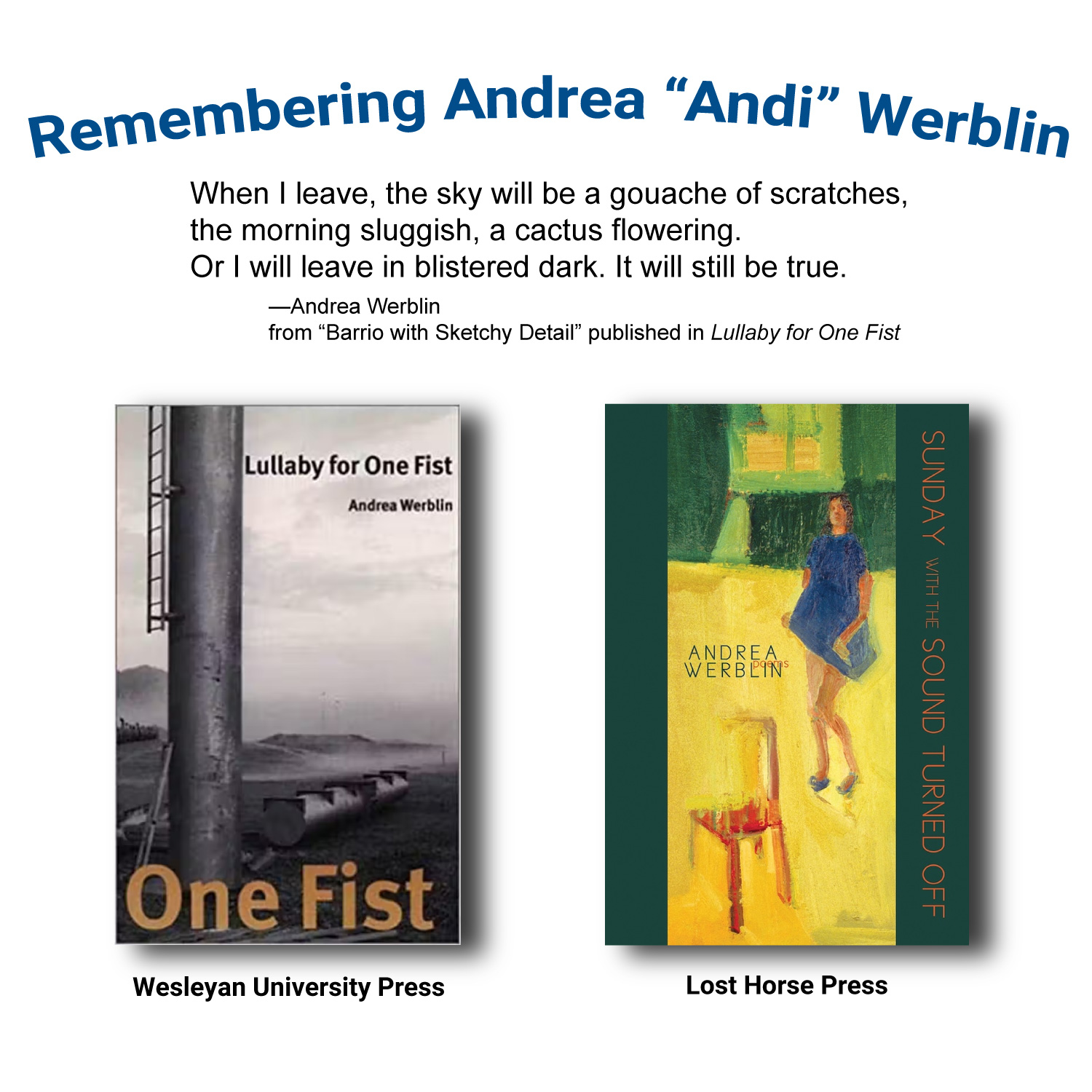 We are deeply saddened to learn of the passing of poet Andrea “Andi” Werblin Reid (November 30, 1965–August 5, 2022) She was the author of Lullaby for One Fist (Wesleyan, 2001) and Sunday with the Sound Turned Off (Lost Horse Press, 2014). Andi, as she is known to family and friends, was also a manuscript reviewer at Kore Press. Her work appeared in BOOG Reader, EOAGH: A Journal of the Arts, The Massachusetts Review, [PANK] magazine, and Smartish Pace. She also worked as a reporter for NPR/Online (Boston, MA); a freelance copy director; and wrote about neuroplasticity, extreme landscapes, amateur pastry-chef adventures, and stretch pants. We send our sincere condolences and much love to the family and friends Andi leaves behind.

Find some poems by Andi at the links below.

Lullaby for One Fist

“A lyrical experience which transcends the personal, creating a sense of place, and, even more importantly, reflecting the high speed of late 90’s/early 21st-century consciousness…[A]n unabashedly sensuous experience.”
—Jane Miller, author Memory at These Speeds: New and Selected Poems

Sunday with the Sound Turned Off

“The through line of Sunday with the Sound Turned Off is Werblin’s voice that wavers not in its navigation of wavering states—of mind, location, and heart. Personal pronouns are not just protagonists here; they are also vehicles, allowing us to get from ‘I tell you these songs go only so far’ to ‘you can majesty your ice-age excuses’ to ‘his human capacity for rain.’ Finally, it is a lyrical relation to the self in the world, and the self with other selves, that this book allows us to enter and to hold.”
—Barbara Cully, author of Under the Hours, Desire Reclining & The New Intimacy

“This second book by Andrea Werblin is filled with wry, savvy poems embodying cautiously accepted psychic discoveries (‘your better synaptic self’) that gesture toward careful self-unmaskings. ‘So much music was misunderstood,’ the speaker muses in the first version of the title poem, like the youthful self-delusions to which we all must wise up—their ‘Lyric exhausted, impermeable to sun.’ The lullaby for one fist of Werblin’s first book is muted here, but the speaker tells herself to accept what is, to ‘swear / it is nothing personal.’ Although these current days of rest have the sound turned off, she knows she must ‘rehearse, rehearse’ her human perseverance.”
—Carolyne Wright, author of A Change of Maps and Seasons of Mangoes & Brainfire