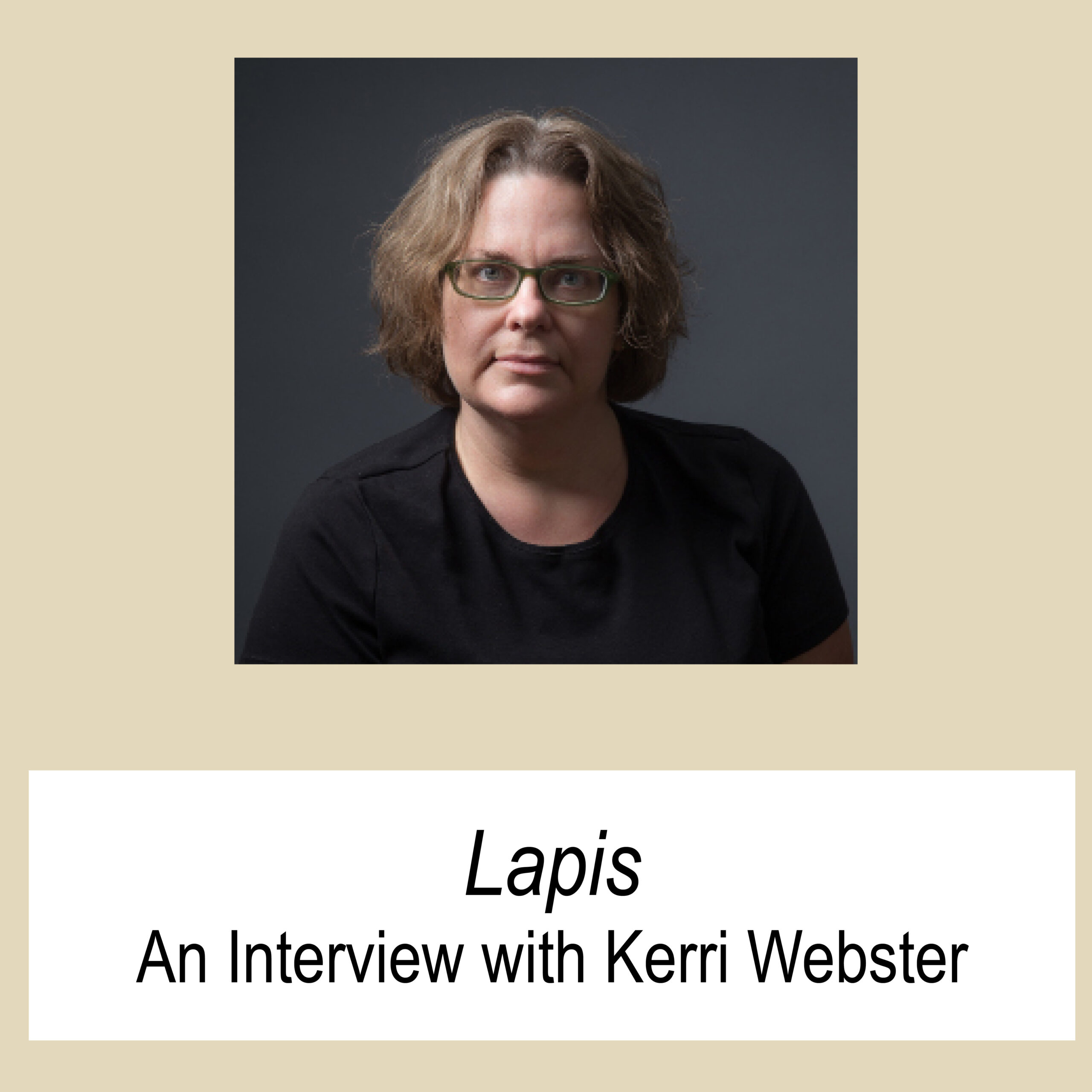 KERRI WEBSTER is the author of the poetry collections The Trailhead, We Do Not Eat Our Hearts Alone, and Grand & Arsenal, the latter of which won the Iowa Poetry Prize. The recipient of awards from the Whiting Foundation and the Poetry Society of America, she was a Visiting Writer-in-Residence at Washington University in St. Louis from 2006–2010. She currently teaches at Boise State University.

In Lapis, poet Kerri Webster writes into the vast space left by the loss of three women: her mother, a mentor, and a friend. What emerges in the vast space grief makes is a newfound sense of living with the dead, of a matrilineal lineage both familial and poetic. The book invites the dead in for company, for comfort, and for guidance, weaving spirituality, the feminine, and a sense of the fragile earth into one “doctrine of Non-linear Revelation.” Webster speaks from a “decadent inwardness” that shapes her work’s inventive language combinations, incantations, and dispatches. Death here is apocalyptic in the deep, root sense of the word: an unveiling that leaves the speaker transformed, and finding renewal in the natural world.

Kerri Webster: A few years ago, I read an article about a 1,000-year-old nun’s skeleton found with lapis lodged in the gums, a sign that she had worked on church manuscripts, work generally thought to be the province of monks. Lapis as you say is in the book a metaphor for communicating with the dead, but also for women’s place within the grieving process and as recorder of the dead’s lives—sacred work. The poem you reference is based on an actual conversation I had with a local metalsmith who wouldn’t sell me a chunk of his high-grade lapis, and it wasn’t until the conversation had begun that it dawned on me that we were, perversely, talking about a substance that came from the same country as the drug that killed Marni Ludwig, one of two poets (the other being Jane Mead) to whom Lapis is dedicated. Too, as I wrote the book, I became aware of the addictiveness of writing about grief, in that in some ways it allows you an intellectual distance—a numbing, almost—that keeps you from dealing with and feeling the grief itself: another parallel.

Wesleyan UP: You mention honeycomb in some poems, and the honeycomb shape is a decorative element in Lapis. Could you also tell us a little about the honeycomb motif?

Kerri Webster: There are only a few mentions of bees in the book, so I was delighted when either Suzanna or the book designer extrapolated from that the honeycomb motif. In my last book, The Trailhead, the poem “Hill Walk” begins, “Come let us poison all the honeybees for we/ are in world’s dotage,” a gloomy statement on human foolishness. In Lapis, I think the bee starts as a symbol of cruelty, of anger—“light striping the walls to which bees are pinned”—but becomes, by book’s end, a symbol of fecundity, of beauty. Which wasn’t intended, but unfolded as the grieving process unfolded.

Wesleyan UP: In the book, the concept of generations is a theme.  Do you want to talk a little about your family lineage and what it means to you?

Kerri Webster: After the deaths of my mother and of Marni and Jane, I had a strong sense for the first time in my life of living with the dead, of living in community with and communication with the dead. By communication, I don’t mean literally, exactly, but at any given moment or in any given situation I feel like I know exactly what my mother would say and have found myself on more than one occasion telling a sibling, “She wants me to tell you that _______” (which is probably annoying, as she was an inveterate advice-giver). And then, behind my mother, generations of women, and because those women were LDS (though I am not), their histories are preserved as genealogy is hugely important in the church. And when I read Marni or Jane’s work, it becomes part of who I am, informs what I write, which is why it was so important to me that lines of theirs be included. And then behind Marni and Jane, generations of female poets, many of whose lines—Elizabeth Barrett Browning, Julian of Norwich, Adrienne Rich, Dickinson—also made their way into the book

Another thing the book wrestles with is poets’ mortality, what we leave behind. I’ve never been bothered much by my own, content with it being as Keats said (though he was wrong about himself) “writ in water.” But both Jane and Marni died far too young, and there’s such a difference in what we have of them—Jane got to hold her stunning collected, To the Wren: Collected and New Poems, in her hands before she passed, whereas Marni left behind only one jewelbox of a book, Pinwheel. Publication day was bittersweet—I was happy for Lapis, but haunted by the thought that I really shouldn’t have had to write poems about Marni; she should be here writing them herself. Because she was a student before she was a friend, there’s an additional sense of the order of things being utterly screwed up. Hopefully Lapis will turn readers towards Jane and Marni’s work so that they can live on as part of others’ literary lineages and daily lives, too.